The true zeniths of human artistry and creativity have manifested themselves at various points throughout the ages. There is little argument about the fact that, with its combination of alchemical practices, intensely secretive production methods and practices, and striking visual beauty, Murano glass is a superlative example of fine Italian craftsmanship, with an astonishing breadth of history and knowledge forming the foundation of each exquisite item.

While the beauty and skill exhibited by the wonders of Murano glassware are more than enough to warrant its reputation, prestige, and its overall aura of fascination, there is far more to this singular artistic lineage and its treasures than first meets the eye. The story of Murano glass is one confined to a diminutive Venetian island, surrounded by lore and legend, and imbued with alchemical experimentation.

GUARDING THE GLORY OF MURANO

The peerless glassmakers of Murano revelled in their status as alchemists and craftsmen of the highest order, and their work was considered an unrivalled treasure of the Venetian Republic. Fuelling the fires of intrigue surrounding their truly unique wares, rumours arose regarding the artisans of Murano and the practices they undertook. Perhaps the most enduring of these was the claim that glassmakers faced severe penalties were they ever to leave the island, for fear that their knowledge be spread further afield. Fascinatingly, this was for a time true. So closely guarded were the secrets of Murano, extreme punitive measures ranging from imprisonment to hard labour and even execution were in place throughout the Middle Ages, awaiting those who risked exposing the island’s enigmas.

Despite being little more than early explorations in the chemical and physical sciences, alchemy was viewed with great suspicion by the wider public, who frequently interpreted the alchemist’s laboratories as centres of witchcraft and darker arts. With its smelting of metals, use of powdered elements, and the resulting dazzling colours seemingly plucked from the earth, the objets d’art of Murano glass were considered at many points in history to have a magical status, most notably the ability to detect and neutralise poison. 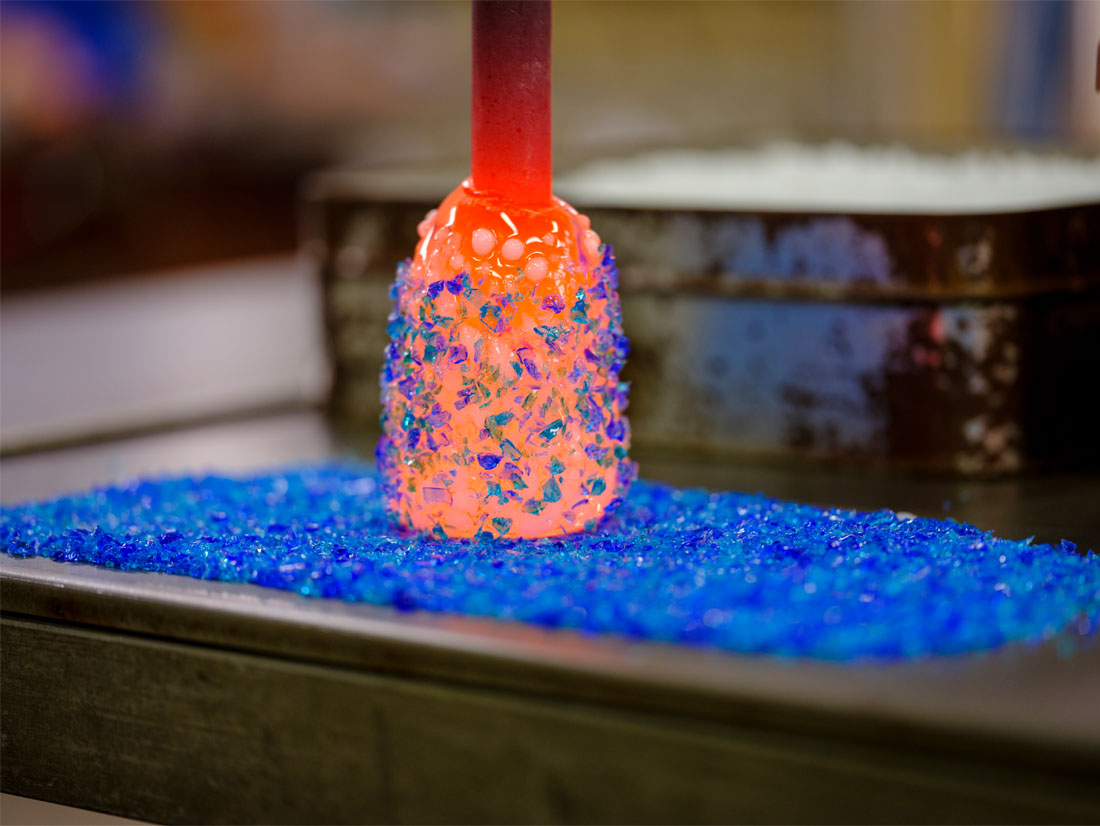 A unique synergy between scientific understanding and the creation of beauty in Murano Glass.

Fine, thin, refined and coloured glassware did not originate in 13th century Venice. Such artistry, and the alchemy which bolsters its foundations, would have been brought to the Italian peninsula from Egypt, Mesopotamia, and beyond. However, with medieval and renaissance Venice being a hub of culture, artistry, and trade unlike any the world had seen before, it is perhaps unsurprising that Murano glass garnered such a powerful reputation across the continent.

While many of the alchemical secrets of Murano were lost to time and political instability, surviving items which date back to the 15th century demonstrate the techniques used, and showcase the styles which gained popularity. For example, we know that Murano glassblowers burned quick-melting salts of tin and titanium to create iridescent finishes on their creations, and the famed avventurina wares, which are flecked with gold, were made by including tiny copper crystals in the glass. With the use of powerful furnaces, the Murano glassmakers could experiment with the colours present in metal oxides and use these to create vivid masterpieces. The synergy between scientific understanding and the creation of beauty had never been stronger and was arguably at a zenity hitherto unmatched.

The 15th and 16th centuries, a feverishly productive era for Venice as a whole, were times of unrivalled innovation for Murano, and saw the perfection of cristallo; the art of creating crystal-clear glass for domestic and decorative usage. The millefiori technique came around the same time, which saw filigree canes of coloured glass bonded to create striking floral patterns. Towards the end of the 16th century, Murano’s alchemists and glassblowers were completely rewriting the rulebook of their craft; glass was being made to resemble marble, and enamelling and diamond engraving vastly expanded decorative possibilities, leading to increased demand and even further artistic experimentation.

The original Murano glassworks remained a cornerstone of Venetian artisanship and industry for over five hundred years, until the glassworks were eventually closed in the mid 19th century. However, the artistic spirit is rarely suppressed for long. In the 20th century, the legacy of Murano was rekindled and resurrected by a handful of dedicated Venetian glassblowers, each keen to embrace the alchemy of Murano, explore the historical techniques, and immerse themselves in the original practices while building upon them with contemporary knowledge.

While the Murano glassware of the early 20th century was undeniably as impressive as ever in its skilful use of colour, clarity, and thinness, it was being revived amid Art Deco and Art Nouveau’s maelstrom of creativity, as well as alongside the wealth of other new artistic schools of the time, each bursting with innovative idioms and ideas. Murano glass, which continued to rely on historic patterns and renaissance sensibilities, was in danger of becoming something it had never been before: nostalgic. The turn of the 20th century saw much-needed efforts to instil new direction and a formalised system into the island’s output. While a new internal hierarchy led to certain highlights of the era, namely by glassblowers and artisans, it wasn’t until the expansion of the luxury market in the 1980s that Murano glass truly found its voice once more.

A renewed market in search of uniquity and a sense of heritage, and a keenness to put individual artistry and localised craftsmanship before mass production led to a contemporary boost in Murano glassware. The increased demand resulted in a more artist-driven industry and allowed Murano glassblowers and designers to produce works of greater creativity, more in line with modern tastes, and with a greater emphasis on the unique and bespoke than ever before.

Murano glass is the result of a millennium of handcrafted tradition, enriched by the intrigue of the unknown. Imbued with mystery, bolstered by mythology, and guarding alchemical secrets of eras past, the treasures of Murano reflect a shared desire to gaze in wonder at objects of beauty; elemental secrets, coloured by an unending human endeavour for perfection.

The art of transformation and formulation at La Prairie is emblematic of the precious Platinum Rare Collection. Just as in the case of Murano glass, the process begins with one singular ingredient, subsequently transformed through a meticulous process of pristine craftsmanship. Appreciated for more than its sheer beauty, platinum is both tensile and durable, allowing it to withstand the test of time.

Artists began to value platinum for its endless malleable possibilities, allowing them to mould this precious metal, sculpt with it, and fashion it into creations that breached the limits of their crafts. Before it can be shaped for casting, platinum must be heated to the astronomical temperature of 1770° Celsius. From there, it can be transformed into an endless array of interpretations, from mirroring liquid to massive, imposing blocks, and from delicate filigree, to infinitesimally fine threads.

It is this fascinating quality of platinum that prompted La Prairie to develop the Platinum Rare Collection – to reveal, to highlight, and to showcase the inherent, timeless beauty of the skin.