ONE HUNDRED YEARS OF BAUHAUS

A CENTURY OF TIMELESSNESS

Few artistic movements have made an impact quite like that of Bauhaus. Indeed, the word itself has become a noun, an adjective, and a household name; the mention of Bauhaus immediately conjures up images of tower blocks and typefaces, of bold architectural aesthetics and pared-back furnishings, and a remarkably wide array of design features in possession of the unmistakable Bauhaus idiom. The artists who studied Bauhaus, most notably the founding father of modern art, Wassily Kandinsky, went on to reimagine painting for a new age and create entirely new visual languages with which to reshape culture as we know it. Celebrated Bauhaus architects, such as Ludwig Mies van der Rohe, would spread their influence as far as Chandigarh in India, Chicago, Tel Aviv, and beyond, and traces of Bauhaus style can be seen everywhere from flat-pack furniture to the minimalist aesthetic of today’s smartphones. This movement, this school of thought as much as design, became the typeface in which the future was written.

Founded in the German Weimar Republic (1919 - 1933), Bauhaus served to break down the barriers between artistry and craftsmanship, with its sights set on a utopian aim of forging a new industry-spanning aesthetic. Driven by experimentation and collaboration, and bolstered by enduring results and a broad spectrum of opinions and reactions, it set the pattern for the rest of the 20th century and today. Now in its centenary year, and after decades which saw Bauhaus equally scorned and celebrated, misunderstood, cast out, and finally adopted wholeheartedly by the mainstream, its adorers and critics alike are able to cast their eye over a century of influence and innovation. Behind Bauhaus' elegant and simplistic lines, and beneath its stark white exterior, we can uncover a true sense of timelessness which has informed the way we live.

INCEPTION: FROM THE JUGENDSTIL TO THE BAUHAUS

Despite its boldness and insistence on an entirely new order, a clear lineage and heritage which led to Bauhaus’ foundation can be traced. Walter Gropius, the Prussian architect behind the creation of the Bauhaus, was insistent on the Bauhaus approach being based on an equal value given to technical knowledge and artistic ability, an approach previously seen in the Jugendstil movement, and the English Arts and Crafts a few decades prior. The Jugendstil, with its youthful approach and the value it placed in high art being used for practical purposes embodied several significant aspects of what would become core tenets of the Bauhaus. Jugendstil artists were known for, among other things, using their collaborative talents to produce everything from architectural designs to stage sets, and from advertisements to more traditional canvases.

Another key movement which formed the bedrock on which the Bauhaus was built was the Wiener Werkstatte. Co-founder Josef Hoffmann, the Austrian ceramicist best known for his iconic monochromatic homewares and eccentric chair designs, demonstrated how the lines are drawn between high art, consumer goods, and industrial design were not as unwavering as was once supposed. One could, if one was on the hunt for the Bauhaus heritage, easily cite his talent and vision as being instrumental in the creation of both the Bauhaus approach and aesthetic in equal measures. 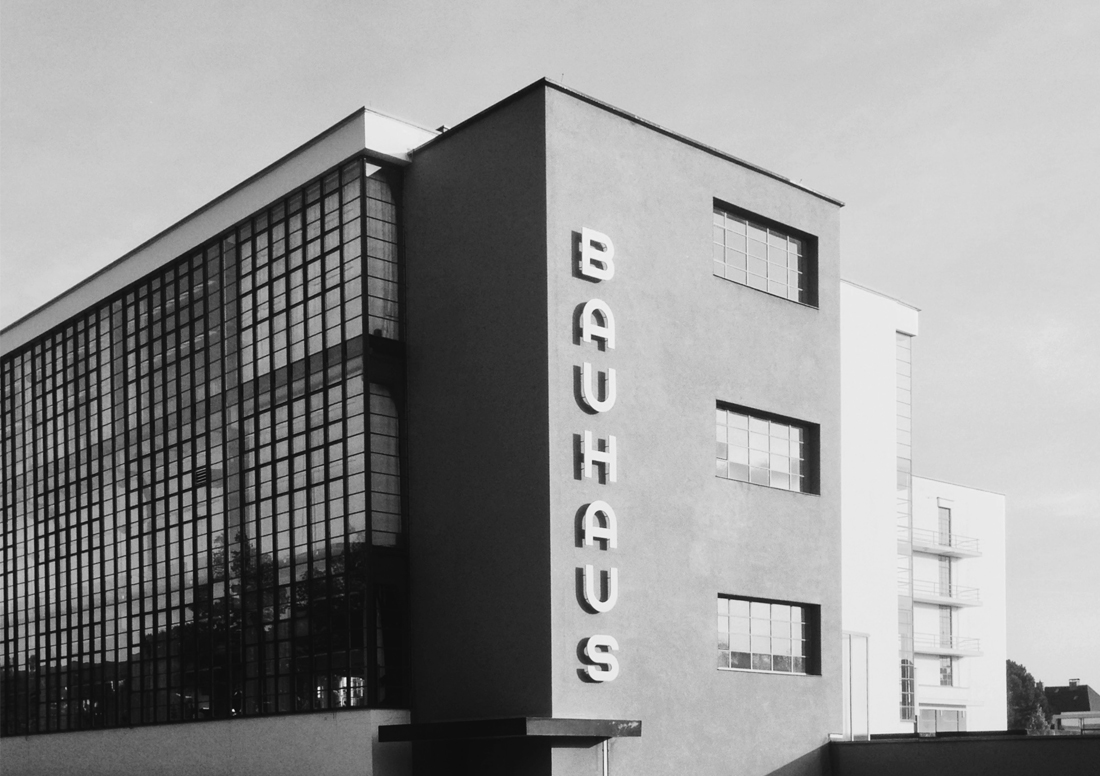 The creation of the Bauhaus as a physical space—and not merely an approach, concept, or aesthetic—was borne of collaboration and the result of a municipal project spearheaded by Gropius in conjunction with the state. The city of Dessau commissioned and supplied the plot of land for the school - the prospect of a new direction, a home-grown design idiom, and a new centre of artistic and technical excellence was clearly more than the local officials could resist.

The school’s original aims were to completely break down the boundaries between all artistic disciplines, and to erode the very systems of thought which separate high art from ‘craft’. Gropius’ founding proclamation was that of “a new building of the future, that will unite every discipline, and which would rise to heaven from the hands of a million workers, as a crystallised symbol of a new faith”. His was a concept of the crossover, taken to previously unimagined levels. The Hungarian artist and photographer Moholy-Nagy is a powerful example to consider. As one of the Bauhaus’s most celebrated associates, his work seamlessly blends technical brilliance with unhindered and liberated camerawork, traditional sculpture, and conceptual art in ways which were entirely new.

While the success of Gropius’ vision is perhaps best known through the modernist architectural idiom borne of Bauhaus design, the artistic heritage of the short-lived school can be found everywhere we look. Indeed, the bold use of line and colour, that unmistakably Bauhaus approach associated with artists and printmakers such as Oskar Schlemmer can be seen at supermarkets, on book covers and grocery packaging, in-car designs, luxury brands, road signs, kitchenware… the list of places in which the Bauhaus spirit of collaboration and the fundamentals of its aesthetic can be found goes on and on.”

Bauhaus was always driven by the belief that in order for artistic ability to flourish, technical excellence must always be at its heart. While this belief was certainly vindicated with evidence of such surrounding us at every turn, the original school had its life cut short by the rise of National Socialism in 1930s Germany. World War II may have changed the direction of the Bauhaus ideology, but its value lost none of its value or ability to appeal, influence, and divide opinion. As the 20th century continued, artistic aesthetics and architectural design became increasingly visibly reminiscent of and inspired by the works which the Bauhaus had launched upon the public consciousness, and this trend seemingly lost none of its paces as the 20th century ended and the 21st began.

Perhaps one of the key catalysts of the timeless appeal of the Bauhaus was its becoming a global phenomenon, rather than a European-based approach to art and design. It is almost ironic that attempts to suppress the creative visions of the Bauhaus in 1930s Germany may have led to it becoming the worldwide tour de force we know it as today. Indeed, the latter half of the 1930s saw the vast majority of the original Bauhaus representatives emigrate to the United States, disillusioned by the backwards-looking artistic culture of Germany at the time. It took almost no time at all for their genius to be recognised by artistic communities of New York, and in 1938, the MoMA launched a full Bauhaus exhibition, thus cementing its position as the modernist global movement in art, architecture, and design. 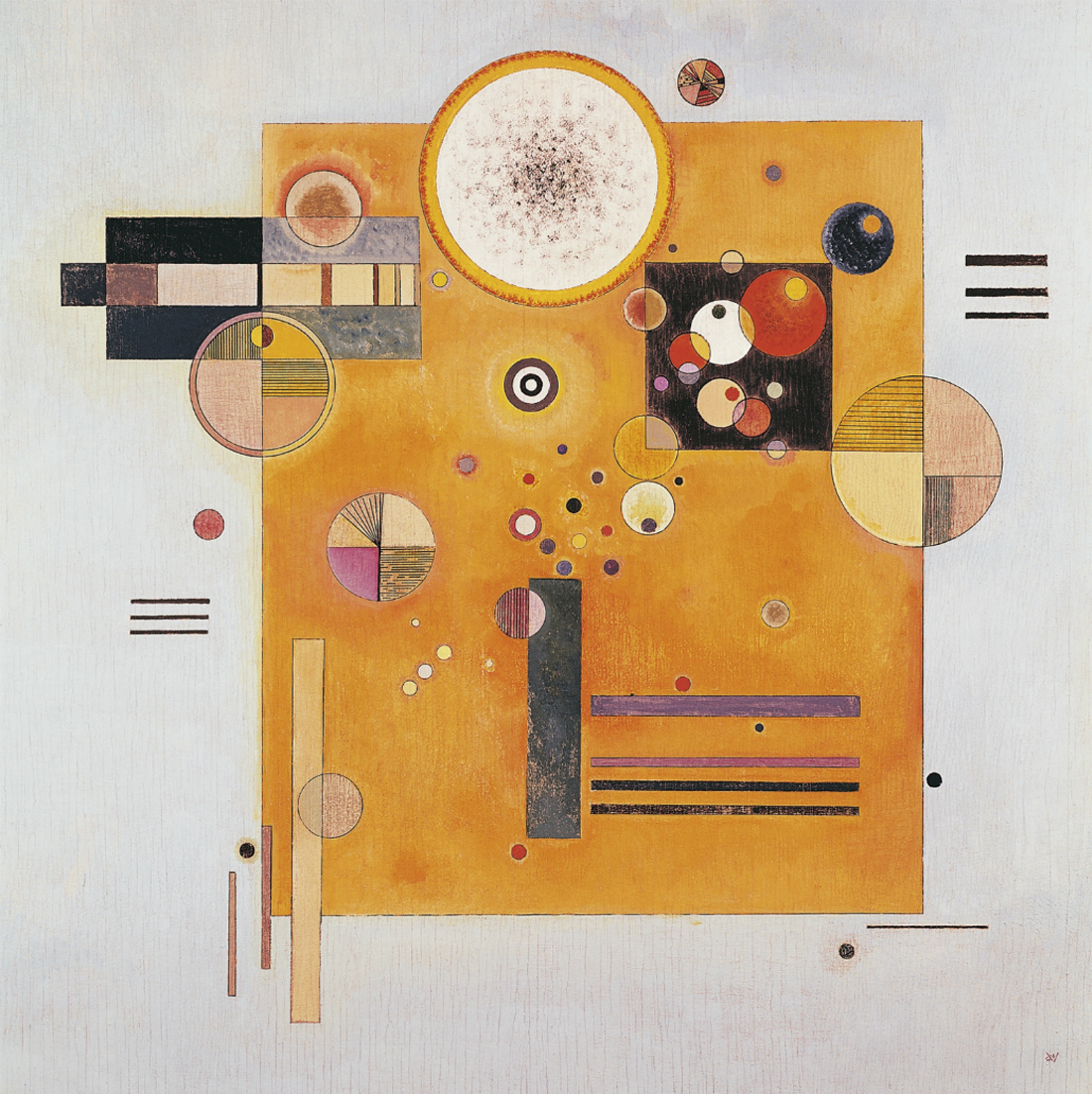 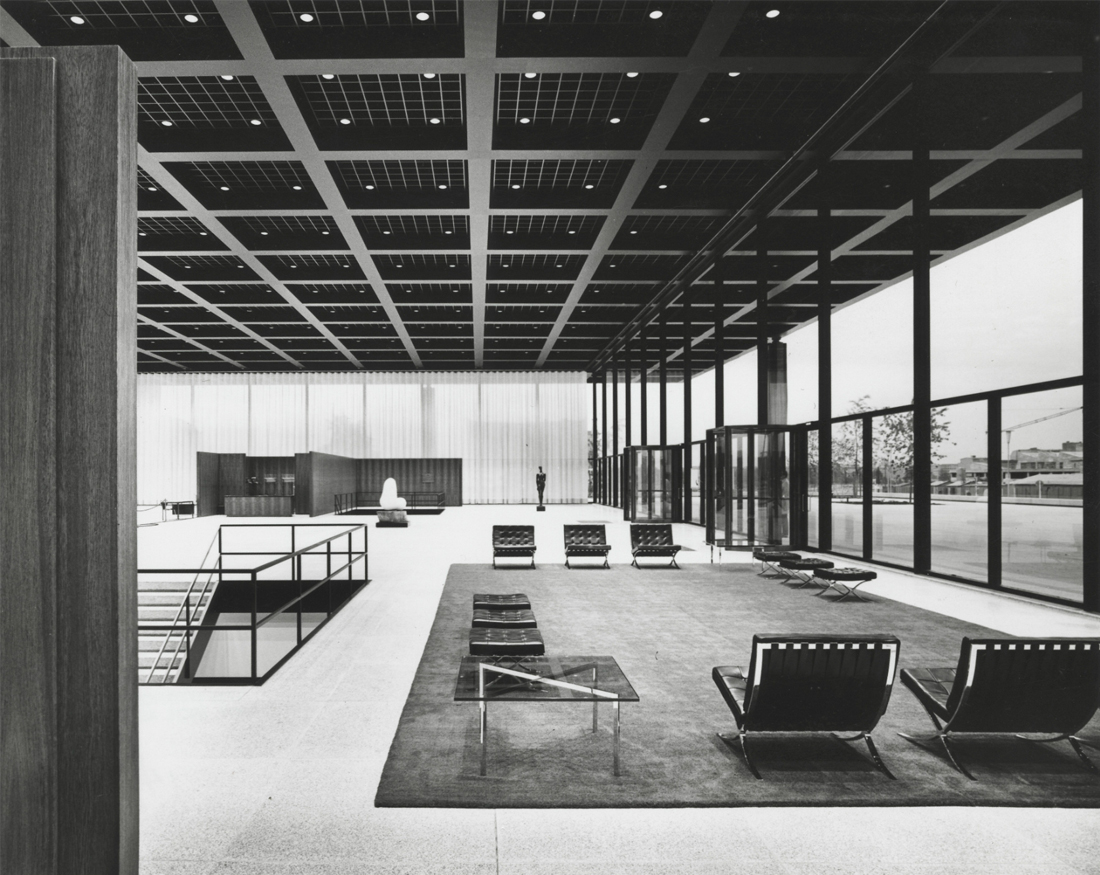 One hundred years on from the founding of perhaps the most influential artistic movement of the 20th century, how are we able to see Bauhaus from a holistic perspective, and with the benefit of hindsight? Undoubtedly, the school and its output created outrage among conservative society at the time.

However, at the end of a century of Bauhaus, we can see that the Bauhaus movement and school was not, as was often claimed, a threat the elegance of its predecessors. Nor is it the manifestation of one small group’s vision of modernism. Bauhaus was, is, and continues to be associated with an abundance of creative energies, true courage in conviction, and a movement which valued technical learnable skills as much as it did raw artistic talent. In these senses and more, it has managed to touch every aspect of commercial production and cultural life, and has made its mark on the artistic movements which followed, a variety of industries, and across almost every country on earth. From the smartphones in our pockets, to the art on our walls and the homes and cities in which we reside, we all live in a Bauhaus-inspired world.

THE TIMELESS INFLUENCE OF BAUHAUS

In the dialogue between form and function, less is more. The geometric shapes and economy of colour seen in the designs of La Prairie's jars and vessels are inspired by the definitive codes of Bauhaus – clean, minimal lines, abstract shapes and pure, striking tones, each co-existing in complementary harmony. The design of the iconic Skin Caviar Luxe Cream is the perfect embodiment of this philosophy. When required by the advanced formulation, certain vessels feature technological activation systems to elevate the experience. In others, an understated design, whose elegance is in its simplicity, takes precedence. 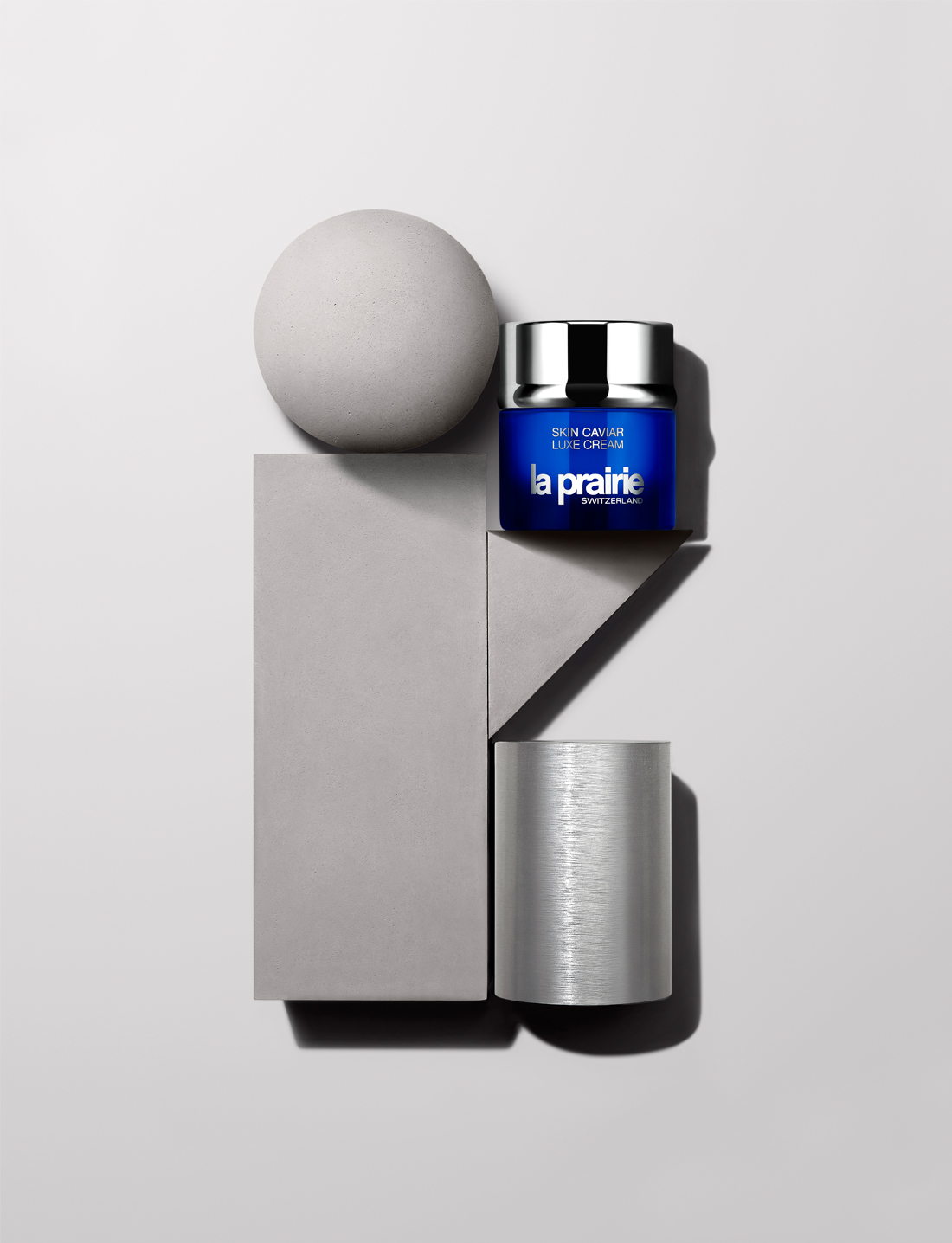