On the south-facing shore at the tip of Switzerland’s Lac Léman lie the sun-soaked vineyards of Lavaux. A natural goldmine, blessed by nature and perfected by hand, these terraced vineyards have evolved over a millennium to attain the status of legend. Their secret is an extraordinary synergy, a fortuitous intermingling of three sources of energy and radiance, enhanced by the inhabitants through the centuries. This synergy is collectively known as the three suns of Lavaux, and it is their combined interaction that creates a revitalising, energizing force unique in the world.

THE THREE SUNS OF LAVAUX

The first of these suns is the one that overlooks us, the sun itself: the source of all energy. This luminous star at the centre of our solar system is also the source of all heat and light – indeed, all life – in Lavaux. Whatever the time of year, the sun blesses the southern shores of Lavaux with an almost Mediterranean radiance as it moves from east to west. The residents of Vaud call this sun ‘Jean Rosset’, as it is referred to in the famous poem “Hymne au soleil Vaudois” by Swiss poet Jean Villard-Gilles. The second of the ‘trois soleils’ is the reflected sun coming off Lac Léman. As it shines on the mirrored surface of the lake, the sun casts its rays back upon the shore, radiating a hot shimmering light over the vineyards that intensifies and complements the direct sunlight. This warm, golden light is then captured and stored in the medieval stone walls of the vineyards, creating the third sun of Lavaux. This third sun is unique, a night sun, in which the concentrated energy of the day is dispelled throughout the vineyards all night long.

SAVOIR-FAIRE HONED THROUGH THE CENTURIES 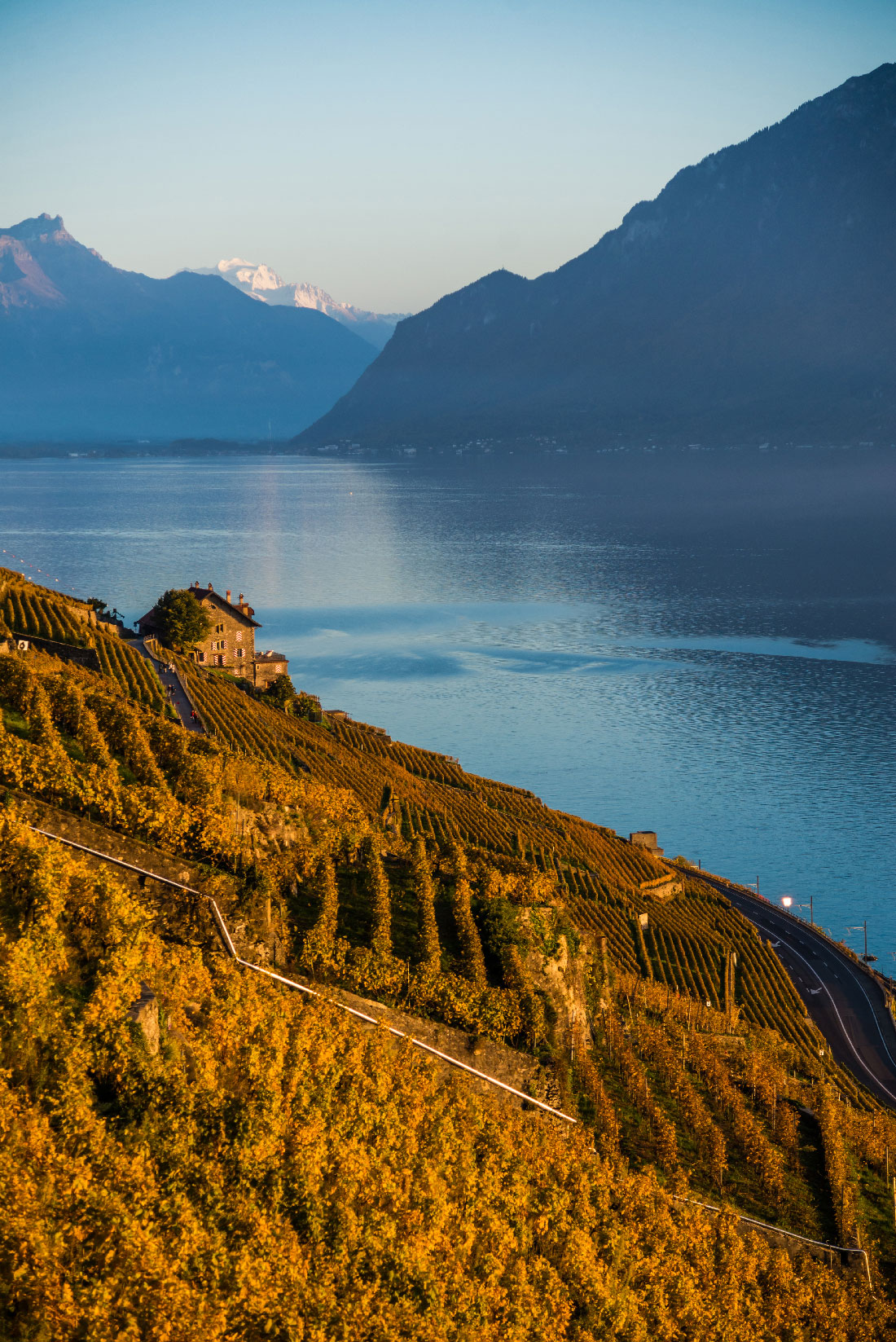 This synergistic energy has helped earn the Lavaux vineyard terraces the ultimate accolade: Unesco World Heritage status. Stretching from Chateau de Chillon to the edge of Lausanne, this bijoux area of land, only thirty kilometres long, comprises only fifty terraced vineyards, dotted between charming villages and the lake itself. Yet Unesco named Lavaux a site of outstanding universal value, not for its size, but for the way in which the synergistic interaction between local people and their environment has optimised local resources. The result is a very special wine, which has contributed to the prosperity and cultural wealth of Lausanne for almost a thousand years.

While evidence exists that grapes for wine have been grown here since Roman times, the current terraces were built by monks in the 11th century. At that time, the Cistercian and Benedictine monasteries controlled the area, and were powerful centres for trade, development and knowledge. The shores rise up quickly, and without the forethought of the monks who cut and built the numerous walled terraces into the mountainside, the energy of the three suns would have remained unharnessed. Indeed, no machinery can be used on hills this precipitous, requiring much of the work in the vineyards to be done by hand. This continuous preservation of the terraces, the proud work of every generation since the 11th century, is what imbues them with such a unique aura. A synergistic vitality, the result of a perfect equilibrium between the people, the land, and the three suns of Lavaux.

Inspired by the unique synergy of the three sources of energy and radiance in the ancient terraced vineyards overlooking lac Léman in the Swiss region of Lavaux, La Prairie has crafted a unique creation aimed at revitalising and replenishing skin at night. Nighttime is a moment of recovery and rebuilding for the skin. These nightly regenerating processes require high amounts of energy to function optimally.

La Prairie has designed a formula to boost energy in devitalised skin following a two-step approach. First, the formula of the new Pure Gold Radiance Nocturnal Balm brings a potent energy-rich nutrient to the skin. Then, La Prairie’s exclusive Pure Gold Diffusion System, unique to the Pure Gold Collection, amplifies the conversion of this energy-rich nutrient into energy by activating an energy sensor. This triggers the optimal use of the energy-rich nutrient by the cells to help fuel the skin’s nightly replenishing processes, which are especially energy-consuming. As a result, night after night, the skin is replenished, revitalised, enriched.

The Origin of Harmony

Tracing the meaning of Harmony, from Classicism to Modernism.