You are currently in the Canada store.

You are visiting La Prairie Canada E-Boutique. Do you wish to change and visit La Prairie United States?

The architecture of Switzerland has historically been a melange of idioms borrowed from the Baroque, the Classical, and beyond, suggesting a nation which has struggled to find its voice via its buildings. This trend swung radically in the opposite direction at the end of the 19th century, with bold home-grown architectural movements such as The Heimatstil sowing the seeds of a distinctly Swiss form of Modernism.

The iconic Le Corbusier brought modern Swiss architecture to the world, his fantasies in concrete and glass providing a powerful counterpoint to that which had always been Switzerland’s unending glory: the vast lakes, snaking rivers, and towering Alps. His proteges that followed bridged the gap between the often brutal and harsh lines of the internationally-minded Modernists, who saw themselves in direct opposition with the random flow of natural forms, and the eco-conscious and proudly Swiss architects produced in the 21st century.

Such contrast has been the driving force behind what has become one of the most forward-thinking architectural identities in the world. Today, the modern and the classical sit side by side, and the practical is taken on flights of pure fancy. 21st century Swiss architects bring Swiss building design back to the land, marrying the wilderness with new zeniths of style, and gleefully embracing the challenges posed by the drama and inaccessibility of the landscape. In doing so, they have carved pathways with which to see the country anew. 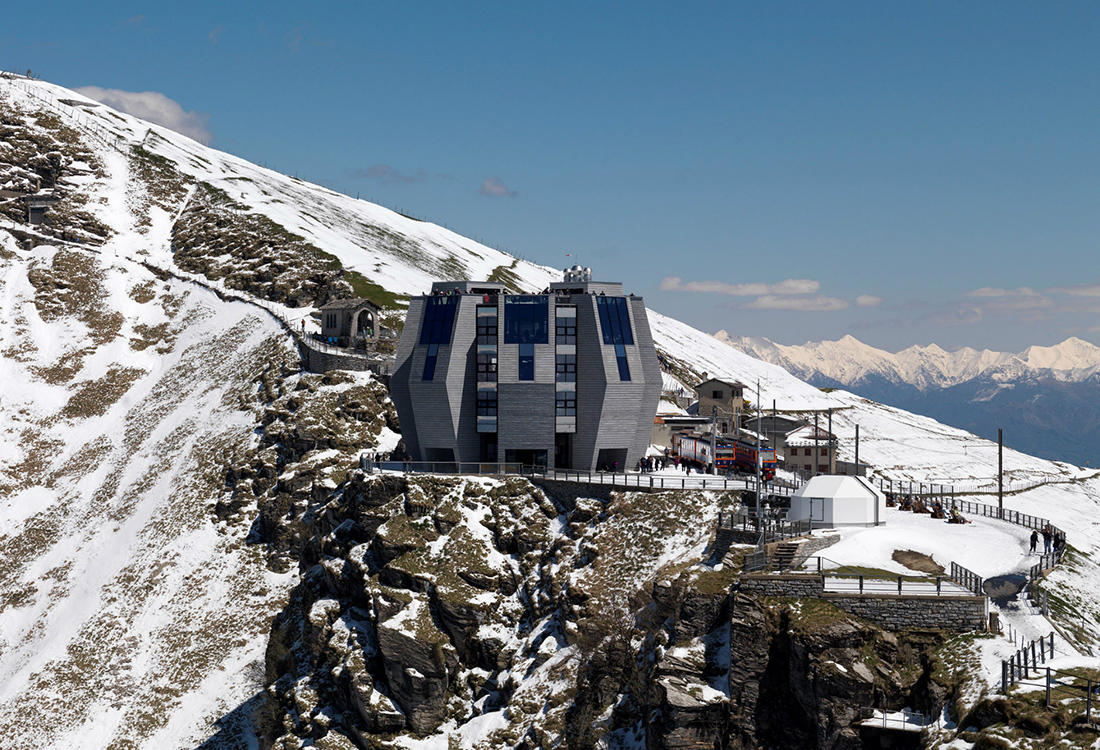 The Fiore di Pietra by architect Mario Botta, lodged against the sharp contours of the Alps.
Photo credit ©Enrico Cano

If the architecture of mid 20th century Switzerland was characterised by those who saw themselves as authors writing sequels to Le Corbusier’s concrete poetry, then Mario Botta was the iconoclast, ripping up pages and penning them anew. For Botta, who was the featured artist at the La Prairie pavilion at the 2018 edition of Art Basel in Miami Beach, the Swiss landscape is an obstacle to be surmounted, and a canvas on which to project fantasies which provide stark contrast and glorious harmony side by side. Throughout his highly-lauded career, he has demonstrated vision and mastery over inhospitable and inaccessible locations, opening them up in a celebration of manpower, design, and appreciation of Switzerland’s most beautiful vistas.

A recently completed project, the Fiore di Pietra restaurant, is a man-made blossom perched perilously upon a mountain pass. With its obtuse angles and sharp lines, it’s an unmistakable product of 21st century Swiss architecture and engineering. However, thanks to a form inspired by the most basic shapes of nature, that playful sense of contrast and cohesion remains breathtakingly intact. While Botta’s buildings are unmistakably modernist, it’s impossible to ignore the fact that they eschew the slick, sleek, and seamless lines of many of his contemporaries. By favouring masonry over glass and steel, his works have an elemental quality. No matter how vividly creations such as Fiore di Pietra may seem to contrast against the white snow or glacial ice, there is invariably a sense of the mountain, of the river, and of the quarry in Botta’s creations, and in this, an inescapable sense of the Swiss, as well.

Thanks to the groundwork completed by the aforementioned giants of Modernist and Post-Modernist Swiss architecture, there has been no shortage of fertile soil in which a new generation of designers and visionaries has been able to take root. Taking the ideas of Botta and his forebears, and leading them to new heights of creativity and new frontiers of architecture as national identity, Switzerland’s latest rush of architects and design houses have entered an era of unrivaled innovation.

The latest generation of Swiss architects are more committed than ever before to showcase new technologies and demonstrate how these allow them to work side by side with nature and the landscape of their country. The sense of place and space that is so essential to Botta’s work has today reached its logical conclusions, as we can see in constructions such as AFGH Architekten’s Lake Rotsee Refuge. This unique and eye-catching design shows how the practical need not be free from imagination. Indeed, the angular, cubic form manages to condense the essence of the forest, the lake, and the tranquility of the space into a building which promises the practicalities of a refuge, while highlighting the mastery of its design and realisation against the elements. 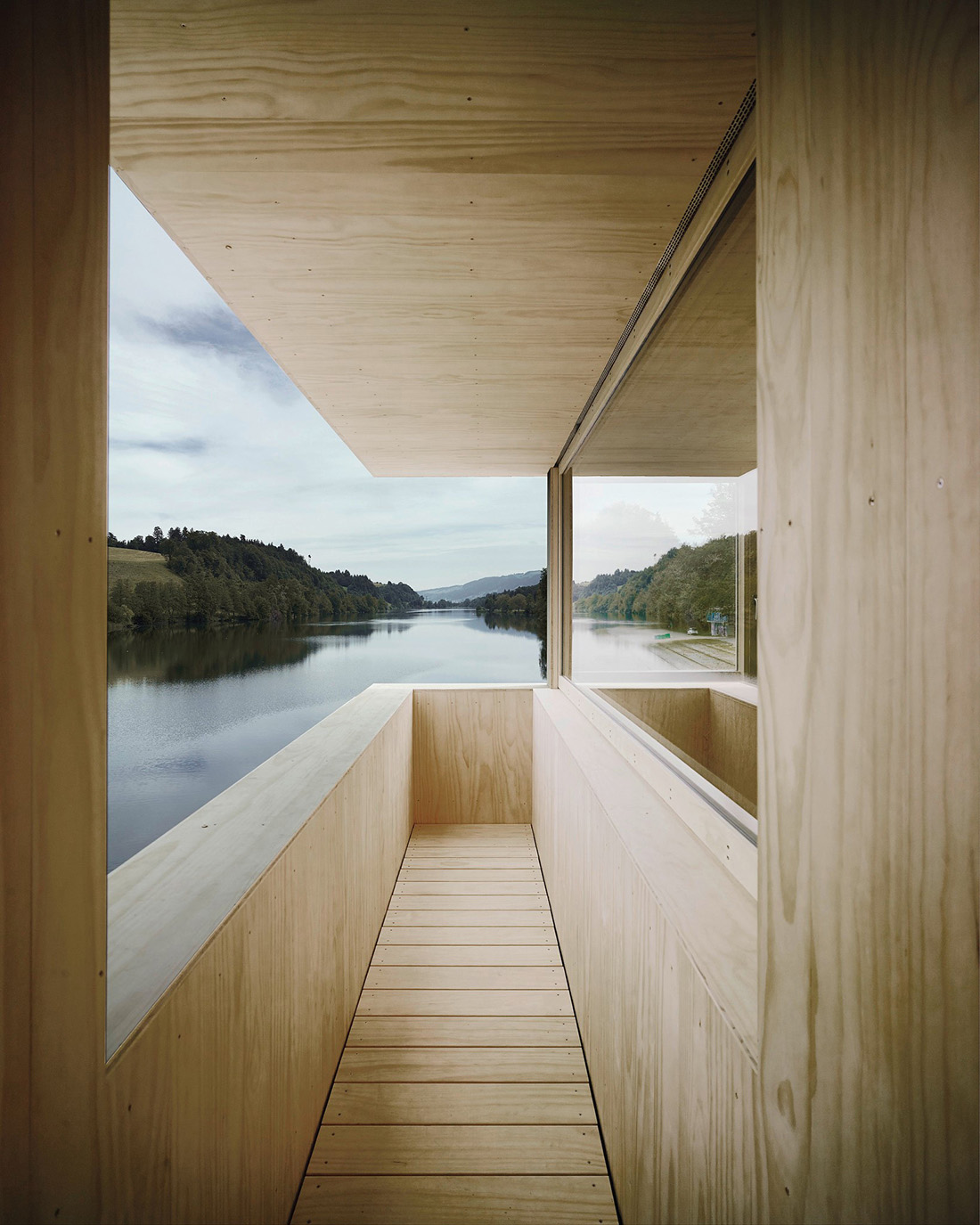 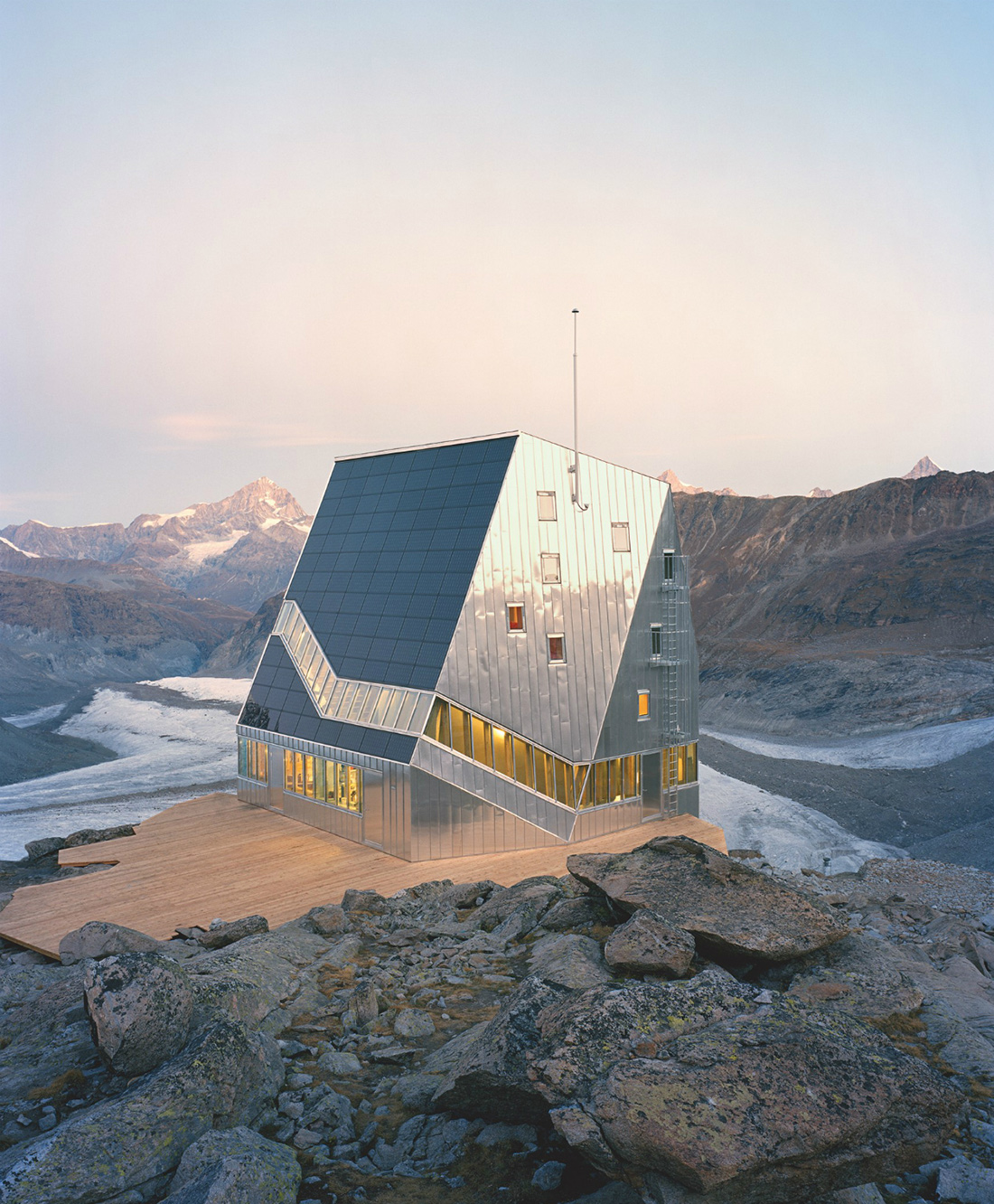 In a country where the sheer magnificence of the countryside is never more than a stone’s throw from even the busiest metropolitan centre, the preservation of the natural world is, as it should be, ever-present on the minds of Switzerland’s designers. Indeed, there is an increasing sense of ecological responsibility among contemporary Swiss architects, which has resulted in some of the most impressive buildings being revealed in recent years.

Take the Sustainable Cabin by Studio Monte Rosa, which plays with the idea of using natural materials with postmodern approaches, and which teasingly takes the concept of blending into and harmonising with the landscape to new extremes. The ecological concept of ‘leaving no trace’ may not be completely possible when it comes to architecture and building, but this cabin, over which the eye passes seamlessly as it reflects and complements its breathtaking backdrop, is about as traceless as a structure can be. With its innovative use of natural materials and forward-thinking renewable energy solutions, the Sustainable Cabin demonstrates how a mountain cabin has the scope to become a groundbreaking structure, while further heightening the enjoyment, accessibility, and preservation of its location.

While the architecture of the past belonged almost exclusively to the grandiosity of the urban environment, the natural habitat of 21st century Swiss architecture is by no means that of the city. From playful yet functional mountaineer’s huts, to state-of-the-art spa complexes and leisure facilities in the countryside, the synergy between the natural world and that of the architectural imagination has never been so vibrant, or such a signifier of national identity. Echoing back against the natural majesty of Switzerland’s mountains, lakes, forests, and rivers, the voice of Swiss architecture sounds clearer than ever.

The fascination with the colour cobalt blue

Why the artist’s eye continues to gravitate towards the vibrant hue.

Helvetica, Then and Now

The lasting appeal of the celebrated Swiss-made typeface