The Art of Innovation

Enter the spellbinding world of virtual reality, where art and technology merge.

Dedicated to innovation. A desire to be a pioneer in the worlds of both art and science. La Prairie talks to Emilie Joly, a leading Swiss virtual reality designer.

Capturing with words what Emilie Joly does is no easy task, even for her. “It is hard to explain, but I can try,” she began.

Positioned at the intersection of art and science through her work as CEO and co-founder of Apelab, an immersive storytelling studio based in Geneva, Switzerland and Los Angeles, Ms. Joly inhabits a unique sphere.

Apelab, founded in 2012, conjures up interactive games, series and films which allow the viewer to glide into worlds that are the product of the imaginations of Ms. Joly and her team.

These environments can be entered via a virtual reality headset: machines at the very edge of technology which, when worn, allow the wearer to enter and navigate a simulated situation. The best comparison, perhaps, is to imagine stepping through a cinema screen while watching a film and becoming a part of the tale being told. One can look up, down, side to side and still find the scene on the screen playing all around you.

In more advanced virtual reality experiences, one can reach out and pick up objects that appear before the eyes by using handheld remote controls, and Apelab’s animated interactive series, Sequenced, goes even further, featuring characters in the virtual world that react to your presence as you enter their domain and move between scenes. 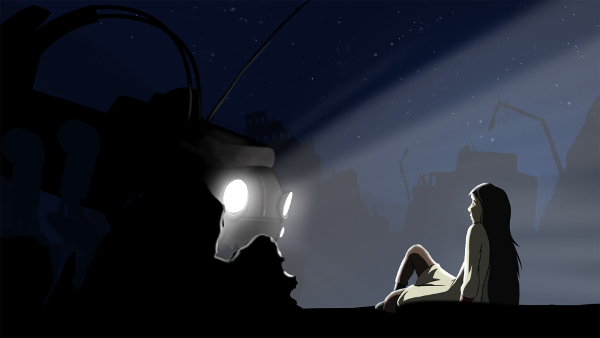 Here, the worlds of art and science dance around and collide into one another. The dichotomy of the creative and analytical industries is disrupted and replaced by an audacious fusion of the two.

“Technology is the tool that we use to create something magical,” Ms. Joly, a native of Switzerland, explained. “I am driven by creativity, but it is the technology that allows us to achieve what we wish.”

Ms. Joly is a designer by training. She earned a Bachelor’s degree in Film before earning a Master’s in Interactive Design from Geneva’s University of Arts and Design. “I am a creative person at heart,” she asserted. “I started to learn how to code in order to explore new ways of telling stories.”

This curiosity has yielded exceptional results. The Sequenced series was a Sundance Institute Official Selection in 2016. It was also recognised at the Toronto Film Festival in the same year. The series presents a world in which there is only one city left on Earth and in which people are sent out to find lost populations. The most special feature of this virtual reality series is that the viewer controls the story. Every scene is embedded with more than 50 possible outcomes, making each person’s experience utterly original.

“It is truly exciting to be at the birth of something which is going to be as big a revolution as the printed press was when it was invented, or cinema,” said Ms. Joly.

“It is the same as with the internet and all new discoveries,” she continued. “Creators must be smart about how experiences evolve and know what they are doing and why they are doing it.”

And as to what she would say to people who believe that one is either gifted creatively or scientifically?

“Scientists are often incredibly creative. The two are linked. It is not necessarily the same part of the brain that drives them, but those things must work together.” For Ms. Joly, this unison of disciplines has a clear endpoint.

“It is how we achieve excellence.”